On Saturday the Graduate Women NSW Central West Branch hosted a dinner at the Services Club with Mr. Jon Wickham BA, BEd, Dip Ed, a former Headmaster of The Kings School, as guest speaker along with his wife Sally. We were pleased to welcome so many guests and in particular Tricia Blombery, the President of GW-NSW and her partner, Stuart Griggs (seen above with Jean Mary Fagan and Anne Holloway). Guests were pleased to hear more about Graduate Women from Tricia and we thank her for her time and sharing her experience. Everyone enjoyed a delicious meal while Branch President, Jenni Fagan introduced Jon, whose presentation was stimulating and informative. 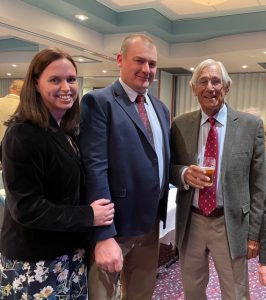 In his address titled  “The Angels of Lemnos”, Jon gave a comprehensive overview of the lives and working conditions of the nurses who cared for the wounded and dying soldiers from the Gallipoli Peninsula. From stories and letters written by the senior nurses to the parents of soldiers who had died from wounds or typhoid, he conveyed the extraordinary conditions these brave women found themselves in.  He spoke initially of the landing at Anzac Cove and explained the roles played by the Anzacs and the English in the first landing.

One anecdote Jon gave concerned the youngest Australian to die in WWI, Jim Martin, who died of typhoid and he read part of the letter written to his mother by Matron Frances Reddock, who was serving on the hospital ship “Glenart Castle”. He was 14 years old. The nurses were required to help build the tent hospital on Lemnos and when there was a large influx of injured soldiers the nurses slept out in the open on the ground, often with the patients nearby. He mentioned Dr Ormiston who also served in WWI on the Western Front and is related to the Ormiston family of Cowra. We were all left with absolute admiration for the nurses who served our soldiers so well and about whom we knew very little. After the presentation Jean Mary Fagan thanked Jon who also generously answered many guests’ questions in an easy and often humorous way!

Proceeds from the evening will go to the two HSC Scholarships awarded anually to girls from Cowra and Canowindra High Schools.